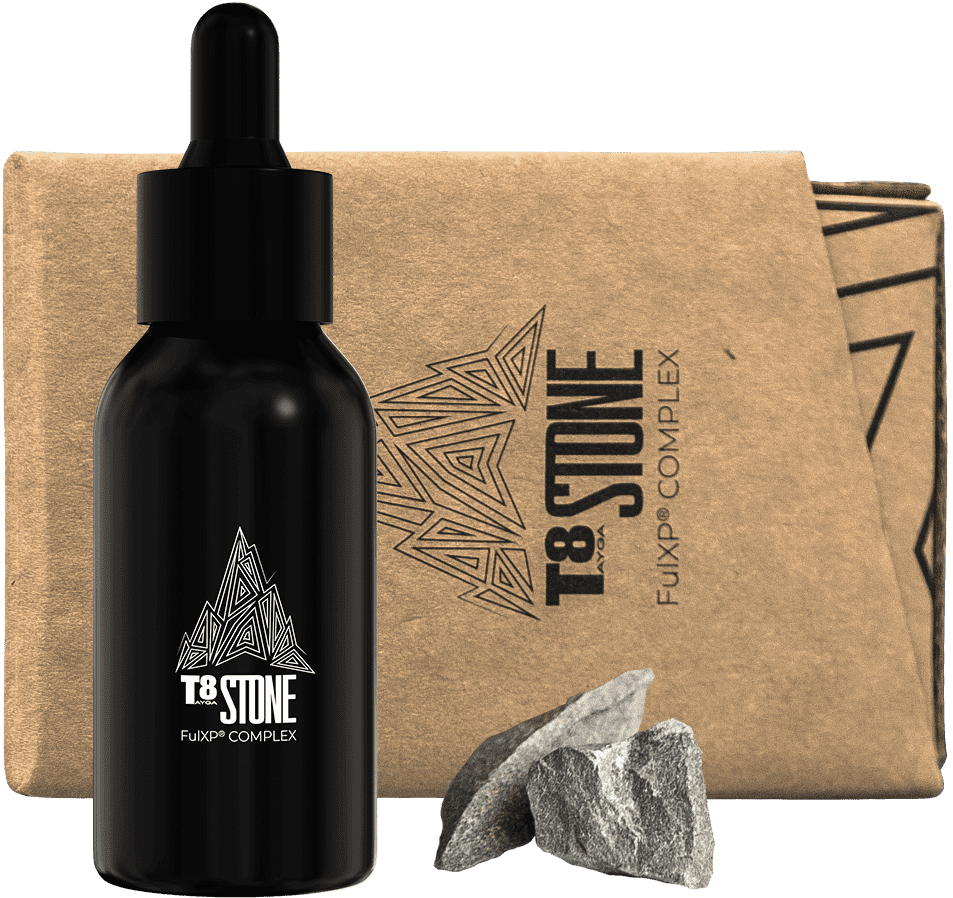 T8 Stone is a concentrate based on FulXP®Complex, which includes humic acids necessary for maintaining the health of mitochondria, as well as for their energy generation.

Humic acids are completely natural compounds that are formed during the natural decomposition of plant and animal tissues. T8 Stone contains all three fractions of humic acids, which are separated depending on the solubility in different liquids:

Academician Vernadsky also spoke about the usefulness of humic acids. He argued that this is the most natural and sustainable form of preserving organic substances in the biosphere. They have a number of beneficial effects on our body, the main of which is to improve the energy generation in the mitochondria.

This effect is due to the fact that the complex structure of humic acids contains many groups that are able to bind reactive oxygen species (free radicals). In the cell, they are formed mainly during the synthesis of adenosine triphosphate (ATP) molecules by mitochondria.

These molecules are a universal way to store energy, which is used by all living beings, including you and us. However, during the synthesis of ATP on the mitochondrial membrane, the same free radicals – reactive oxygen species-are formed as a by-product. In addition, their number increases significantly under the influence of modern living conditions (excess carbohydrates, lack of activity, lack of sleep and constant stress). Free radicals damage the membrane, impairing its operation, and can lead to the death of the entire mitochondria.

Accordingly, if we do not change the lifestyle and at the same time stimulate the energy generation by the mitochondrial pool of the cell, we will inevitably increase the synthesis of reactive oxygen species, and hence the level of oxidative stress. The humic acids of the FulXP complex, which is part of T8 Stone concentrate, will help to interrupt this closed cycle. They attach the free radicals that are in the cell, and thereby neutralize their aggressive action. Thanks to this, the mitochondria can produce more energy without the risk of damage.

In addition, modern studies have found several more useful effects in humic acids:
1. Suppression of virus activity.
2. Binding and elimination of heavy metals and radionuclides.
3. Neutralization of organic toxins both in the intestines and in the blood.
4. Improving the work of all parts of the immune system.
5. Removal of inflammatory reactions.
6. Acceleration of tissue regeneration.

The daily dosage of T8 Stone is only 2 ml – 1 ml in the morning after breakfast and 1 ml in the evening before going to bed. The concentrate should be dissolved in 250 ml of bottled water (not tap water!). The full course is 25 days, after which a one-week break is required.